As part of a limited competition King’s College invited Freeland Rees Roberts Architects to submit proposals to transform a rather gloomy courtyard overlooked by the Gothic Revival range designed by William Wilkins and George Gilbert Scott to the north and east, and the 1968 Modernist buildings designed by James Cubitt to the south and west. The scheme would provide a revitalised courtyard with a new auditorium, social and meeting spaces, as well as restoring a lost Wilkins’ staircase.

We proposed enclosing the courtyard with a large glazed roof with a lower level around the perimeter so as not to internalise the student rooms above or spoil the setting of the Wilkins Scott oriel stair window. The form was developed with specialist structural glazing company Waagner Biro. By relocating the college bar to the under-croft alongside King’s Lane, a new meeting space could be created in the old bar space with a large foldaway wall to allow the room to be opened up to the new entrance foyer and courtyard. A second Chetwynd room could be created by removing most of the WCs and putting them into an enlarged basement. This provides space for a second meeting room with frontage onto King’s Parade.

The Keynes’ Hall would be enlarged to make an auditorium space for 245 with fixed raked seating and level access. The stage area and balcony is removed and the space turned through 180 degrees.

Two new bars are created by infilling the under-croft and opening up a stair and lift-well to the basement level which will create enhanced facilities in locations that do not compromise other functions or residents. Locating the new WCs in the basement puts them in a central position fully accessible to all, rather than occupying prime positions on the ground floor.

King’s Lane is not a pleasant thoroughfare, but a renewed sense of activity would help improve the route through. The introduction of angled windows with decorative glass maintains the sense of a college court beyond, offering glimpses of the new space. 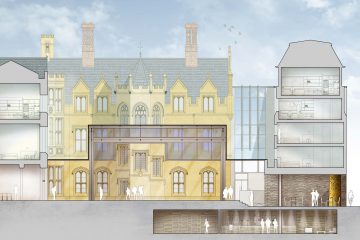 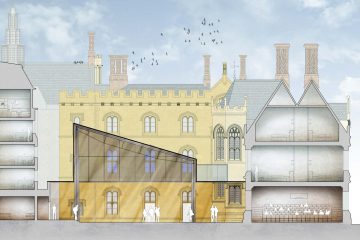 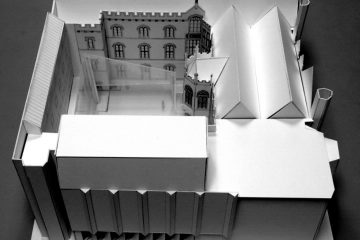 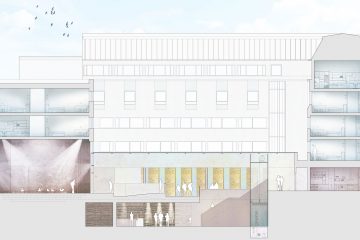