At Gravel Hill we have just completed a 1.6M office and mixed use development for Cambridge University. It is the first building work to be completed for the North West Cambridge Development and houses the Development Office, a Community Centre, and Studios for the Artists in Residence (Part of a Section 106 Agreement). Many of the farm buildings on the site were in poor condition. The client had a limited budget to refurbish these buildings and so value engineering of these spaces and analysing exactly what was wanted in terms of use was very important.

The new larch-clad building has a temporary community centre for North West Cambridge residents on the ground floor and a first floor open plan office for the development team, with views over the new NWCD site. The linked Victorian farmhouse was converted into meeting rooms. The Artist studio, which was a cowshed, now forms a very useful and light-filled studio space with its original features preserved.

It was decided to make the office building a prefabricated modular building because of its intentionally limited life span and rapid construction programme. The brise soleil of laminated larch is planted with climbers that will eventually spread across the façade. 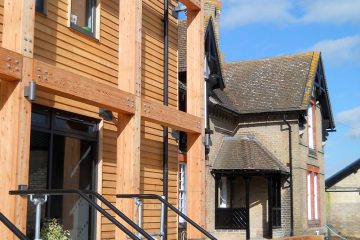 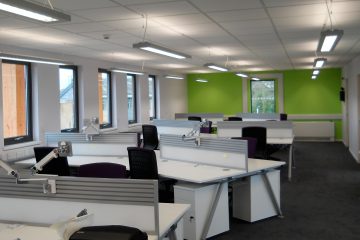