Thomas Henry Lyon was an architect closely associated with the early twentieth century architecture in Cambridge. His neo-baroque chapel for Little St Mary’s (St Mary the Less), the Lady Chapel completed in 1931, was a thoughtful departure from the Gothic medieval church: its simple composition echoes the Cappella degli Scrovegni at Padua, painted by Giotto in 1305.

The Lady Chapel has long been, if not physically, spiritually at the centre of the church. Lyon’s original design for the chapel had a dark blue and silver theme, with a Persian carpet in front of the altar and varnished timber floor. In the 1990s, the parish had the Lady Chapel refurbished: the floor carpeted and upholstered seating added, the blue of the reredos was significantly lightened and the silver replaced with gold. Harsh strip fluorescent lights were put along the tops of the walls facing upwards to light the ceiling. Tthe ceiling has since become badly cracked and the Chapel decorations tired and perceived as dark and depressing.

Freeland Rees Roberts was commissioned to undertake a sensitive and tasteful restoration of the chapel, with the aim of remaking the spiritual centre of the church a beautiful place that fosters prayer and devotion. The vaulted ceiling has been painted a deep blue using earth pigments and decorated with fine gold stars using traditional gilding techniques, of gesso base, gilding, tooling and burnishing. The floor has been refinished and simple iron pendant lights with discrete LED lights discreetly installed to light the chapel. 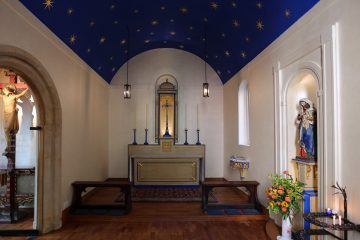 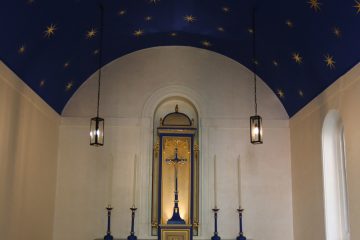 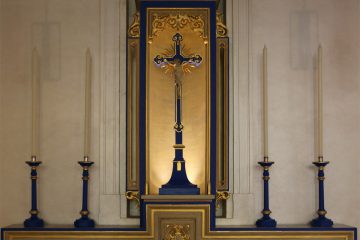 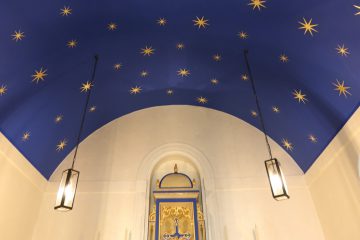